Everyone wants to see their kid succeed in the classroom, so receiving complaints about your kid’s classroom behavior can be a real downer. 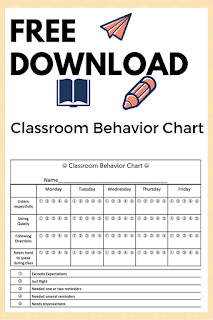 When I received phone calls from my first grader’s teacher that my son was disrupting the class I knew I would have to be proactive.

I spoke to my friend who was going through a similar situation with her daughter, and she described a classroom behavior chart she was using which was working out really well.

Unlike other behavior charts, this one rewarded based on a continuum:

For every category of classroom behavior on the chart, she received one of four grades.

This showed her daughter very clearly where she was succeeding and where she needed to improve.

How the Chart Works

Raises hand to speak during class

My son was very excited about it, and his teacher agreed to try it.

The first day we tries it out there was an immediate improvement in his behavior!

This was likely because of the reward system we used.

Altogether he usually makes between $1-$2 a week which he can save and/or spend on prizes as he chooses. Although he still has some “off days”, the motivation to improve is definitely there.

His teacher finds it really helpful and we are happy to be proactive in helping our son’s succeed in the classroom.

I hope this Classroom Behavior Chart  will be as useful to others as it is for us. What Pediatricians Should Know Before Speaking to their Patients Best All Natural Sunscreen for Kids